The wine has a golden yellow color.

Elegant and balanced on the palate, the wine has good potential. Long aftertaste

The wine has a scent of exotic flowers and fruits, complemented by hints of oak.

The wine goes well with pork in cream sauce or salmon with sour sauce.

The most prominent and characteristic of the Premiers Crus considered Charmes, Perrieres and Genevrieres. In Zhenevrer vineyards spread over an area of ​​16.5 hectares, of which 2.65 hectares owned by Bouchard Pere e Fiss. Soil vineyards - gravel with a high content of clay, limestone and a noticeable presence of iron. Local wines are rich, with strong notes of exotic, more rounded than in Perrer. At the same wine Zhenevrer is neither coarse nor heavy.

Winery Bouchard Pere & Fils (Bouchard Pere Fils e) was founded in 1731, thanks to the dedication and patient work of several generations of today it is one of the best in Burgundy.

In 1731, Michel Bouchard, a trader from Dauphin, has decided to set up business in Volne. Together with his son Joseph, he began to resell the wine in barrels. In 1775, Joseph Bouchard gets a first portion of vineyards located in Volne and house in Bonn. But farming Bouchard Pere e Fiss was seriously expand only while driving his son Joseph, Antoine Philibert Bouchard. In 1789, during the French Revolution happened division of vineyards in Burgundy. At this time, most of the vineyards owned by the clergy, they were confiscated and put up for sale. Antoine took the opportunity to expand the domain. In 1791, the vineyards belonging to the abbey Mezer in Bonn, including the Clos Saint-Landry, Avo and Tёron were sold Bouchard Pere e Fiss. Since that time, the Clos Saint-Landry became a monopoly, it means that the family is the master of all Bouchard vineyard.

In 1820, Bernard Bouchard bought the former royal fortress built by King Louis XI. Since then, the walls of this fortress kept the great house wine Bouchard Père e Fiss.

Throughout the 20th century, Bouchard focused on expanding its economy. And, despite the fact that the House of Bouchard Pere e Fiss, like any other business in France, faced with all the dramas of the 20th century (the First World War, the crisis 30s, World War II), they retained possession, collected nine generations . On the eve of the First World War, has been around for 200 years, the House of Bouchard Pere e Fiss owned a beautiful domain in Bonn that resides on 35 different vineyards with a total area of ​​50 hectares. In the second half of the 20th century there was an exchange between the house vineyards Bouchard and other owners, which demonstrated ongoing commitment to improving family Bouchard their possessions. In 1969, the purchase of plots was in full swing, acquired vineyards in Meursault, Chambolle-Myusini and Zhevre-Shamberten, and in 1972 bought land in Grand Cru Chambertin.

In 1995, the family sold the farm Bouchard very old family from Champagne - Genriotam, who continued the traditions established by the ninth generation of the family Bouchard.

In 2005, the winery was opened Saint Vincent and built a new cellar. Thanks to valuable centuries-old traditions and the use of new technologies here are wines of the highest class.

Today Bouchard Pere e Fiss has 130 hectares of vineyards, of which 86 hectares - Premiers Crus and Grands Crus. Vineyards are known not only for its size, but a delightful and location. It employs a team of experienced professionals, the vineyards are trying to limit the use of fertilizers. In the process of wine making is paid great attention to every step, the crop is harvested by hand, the grapes from each vineyard vinified separately. The wines are aged in the fortress of Chateau de Beaune, which has received the status of "historical monument". This created ideal conditions for the maturation of wines, some of which date to the 19th century, while others are more than 50 years. 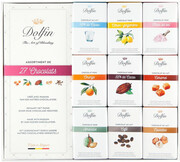