The wine has a refined aroma with hints of black currant, plum and barely noticeable nuances of chocolate and vanilla.

"Bucephalus" Red Blend - a top wine Black Stallion Winery, which combines elegance, strength and character. The name of the wine is named after the magnificent black stallion, favorite horse of Alexander the Great - Bucephalus. This horse struck his strength in battle. For the production of wine "Bucephalus" grapes are harvested only from the best premium sites in the Napa Valley. Each variety is vinified separately. Aging wine in oak barrels lasts 18 months. "Bucephalus" produced a very limited number of only 200-300 bottles.

In July 2007, after more than two years of construction in the Napa Valley was opened prestigious winery Black Stallion Winery. The farm got its name in honor of the historic equestrian center, indoor track is now being used to wineries, but the remains of 36 stables still exist. In May 2010, the Black Stallion Winery was purchased Delicato Family - one of the leading wine producers in the country.

The company was founded Delicato Family emigrated from Sicily Gaspare Indelicato in 1924. Gaspare found similarities Italian climate with warm and sunny climate of California. His dream was to growing quality grapes to create premium wines at affordable prices. He pitched a small vineyard, measuring 4.8 hectares at the foot of the mountains in the vicinity of Lod. The company gradually expanded. Sons Gaspare bought new vineyards, including - San Bernabe Vineyard in the coolest part of the valley of Monterrey. This vineyard has become a guarantee of quality wines Delicato. Today, family owned winery in 2833 hectares of vineyards located in different climatic regions of California - from cool to hot coast of Monterrey foothills of the Rocky Mountains in Lod.
Delicato - one of America's most successful wineries. Each year the farm sells more than sixteen and a half million bottles of wine around the world. Delicato winemakers success did not go unnoticed. Commission of the prestigious World Championship of wines and spirits International Wine & Spirits Competition for two consecutive years, in 2001 and 2002, appropriated "Delicato Family" honorary title of "Best winery in the United States." In addition, the wine from Delicato Shiraz twice (2001 - 2002) was named the best California wine in this category at the annual California State Fair. 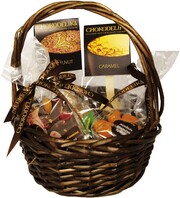